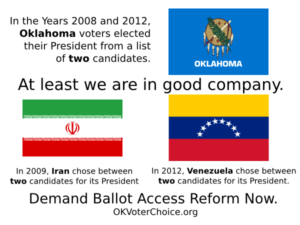 What is that saying about glass houses and throwing stones? I think Kerry needs to redirect some of that anger and frustration back at home. Everything that Kerry is accusing Iran’s regime of doing, the United States is just as guilty. Kerry complains of an unelected body deciding who is allowed to run in the Presidential elections based on their support of the current regime. The US also has one such body, the Commission on Presidential Debates. This body was founded by and is currently run by Republicans and Democrats and operates with the goal to only allow Republican and Democratic candidates on televised debates. Its rules for invitations to the debates are set up in such a way that no alternative candidates are allowed to participate. END_OF_DOCUMENT_TOKEN_TO_BE_REPLACED