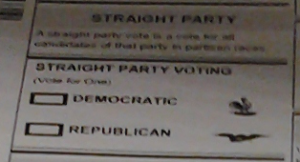 There are two major flaws with this voting device. The first being that Independent candidates are not represented in this system. The second being that not all races have a candidate from all qualified parties. END_OF_DOCUMENT_TOKEN_TO_BE_REPLACED