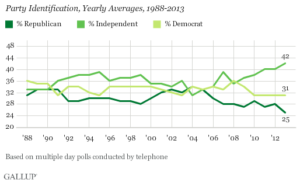 It was only last month that we highlighted a Gallup poll which showed that only 10% of the US population are pleased with Congress. In that article, we lamented the fact that despite a history of low voter approval, Congresspersons often enjoy a 90+% reelection rate. But that disapproval rate is not the only thing working against Congress at this point.

END_OF_DOCUMENT_TOKEN_TO_BE_REPLACED

With all the controversies in D.C. going on, is it really surprising to find out that Congress’s approval rating is at an all time low? According to a new Gallup poll, that rating has fallen to a mere 10%. That rank places it last among 16 institutions that Gallup listed. People have lower confidence in Congress than they do banks, the criminal justice system and the police. Even HMOs rank higher than Congress.

The percentage of Americans expressing a great deal or quite a lot of confidence in Congress is the lowest for a trend that dates back to 1973. The high point for Congress, 42%, came in that year.

Confidence in Congress has been at its lowest points for several years, while it was higher in the mid-1980s and in the early 2000s.

And this rating shows across all political ideologies. END_OF_DOCUMENT_TOKEN_TO_BE_REPLACED